Show and Tell Time!
I took some pictures of some recent improvements. The funny thing is that most of this hapened within five hours, after a previous weekend where we had two days without Amelia and Jeff had five days off in a row, and our only goal was to get some things done-- and very little actually was accomplished! I guess that some days, things just go your way, and same with the reverse!
I started by refinishing an old piece of furniture with some shiny black spray paint-- it looks so much better, and took all of 20 minutes and $3.35! 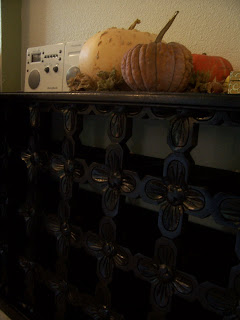 I found some salvaged copper tile at the Rebuilding Center for $10, and finished our countertops with it. 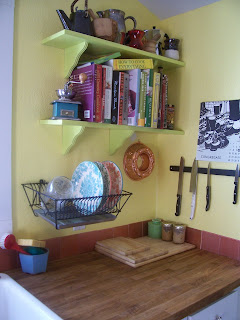 Jeff put shelves up in our pantry, also with some salvaged lumber ($2!) from the same place. We will use these for storing canned foods and foods that we're culturing, etc. It feels great to have a few more shelves-- we're starved for storage space around here. 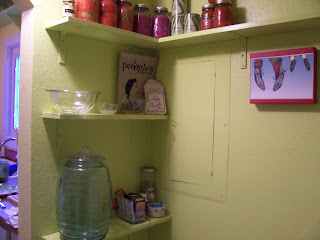 A couple of days later, I repainted some old shelves we had to go with their old brackets. (We've installed them in three different homes now!) We put these up over our washing machine, and I found some penny candy jars and silver scoops for the laundry soaps. For some odd reason, I have always fantasized about having a real laundry room, and putting my detergents and laundry helpers in jars.... 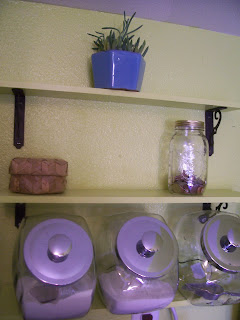 It feels SO GOOD to see the kitchen and utility room inching their way closer to being "finished" so I can devote my attention competely to other rooms. I spend so much of my day in these rooms, that they have been the top priority so far. Next project: painting our refrigerator turqoise with automotive paint!
Posted by Unknown at 4:07 PM

It all looks GREAT! I see you found the jars and scoops! Cool! You are really making good use the the space available. Can hardly wait to see it!

your home looks so fun Ariana- I love it all!-carol

'Putting your laundry helpers in jars' sounds a little creepy, but maybe just because we've lived in the Philippines so long... :-)

Everything looks great, Ariana! You've come up with some creative solutions. I like your house; the fact that it's old is fun.

Ariana, you are so creative! I love it!
Hey, I want you to meet my dear friend, Abby. She just moved to Portland from Pasadena. She is my pastor's wife! I love her (and the entire family) dearly. Check out her blog...I'd love to get you two in touch if/when you can.
www.abbyosborn.blogspot.com

Ariana, I love all the things you're doing and the colors are so pretty too! Do you have lavendar ceilings? The light is so pretty... Thanks for blogging again!

I love your house. I really do. It inspires the designer in me.

Aww, thanks everyone! I wish I could have you over, but I'll just do my best with pictures!

Leslie-- I'd love to meet your friend. You can email me at ariana629(at)dslextreme.com.

Oh-- A. Robin, the ceilings aren't lavender, although the pictures do make them look like that. I've been pretty brave with color, but I'm not sure I would've even thought of that!