I took Amelia to the park this afternoon, even though it was under 40 degrees. We had an old loaf of bread to get rid of, so I thought it would be fun to go feed the fowl over there. Amelia has a soft spot in her heart for birds and ducks, and has enjoyed visiting them there before. However, I had no idea what kind of flock we would attract! I think the birds (are they herons?) recognize bagged loaves of bread, because as soon as we got out of the car they all landed around us and walked with us to the water's edge. I wish I had a video camera-- it got so crazy! The birds were all around us and flying overhead, squawking loudly. I was throwing pieces of bread up in the air, and the birds would hover and catch each piece-- it's a wonder we didn't get pooped on. The ducks were also eager, but clearly bullied by the birds. One bold duck got out of the water and stayed right next to us and took bread from my hand for a while. Amelia was also wanting to eat the bread, but I was nervous that some critter would take it from her and scar her for life. Later we moved to the bank and tried to give the ducks more of a shot at it. 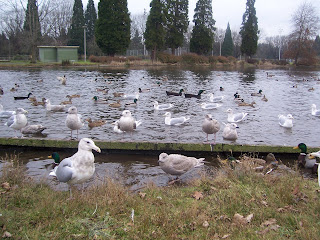 These are just some of the birds, one side of the circle that enclosed us. 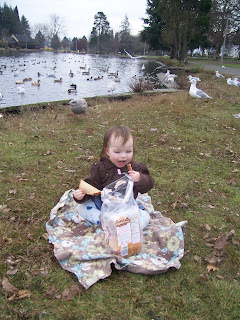 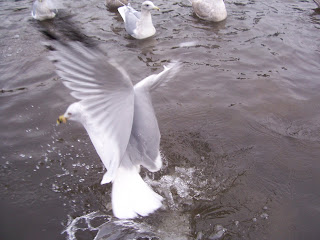 I love these action shots, especially the one below of the bird snatching the bread out of a "too slow" duck's beak! 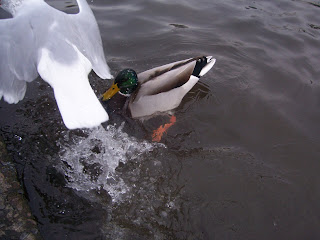 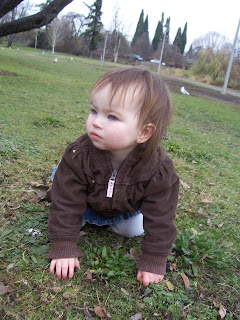 I let Amelia crawl all over the ground, even though it was covered in bird turd-- but I drew the line at picking them up! 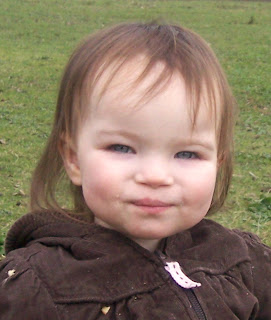 Wow, lots of sea gulls! Good way to spend some time out! Love that last picture!

Amelia looks so beautiful!
I am happy things are going well for you in Portland.