I'm a little late on reporting about our Easter Sunday, but I actually took pictures, so there's no way I can skip posting about it.

On Saturday I got some time alone and went to the farmer's market in downtown. I was so glad that I was by myself, since it was incredibly crowded. I spent a lot of time standing still in the middle of a swarm of people waiting for someone to move so I could edge a little closer to a produce stall. Still, it was a lot of fun, and of course such a treat to get a cup of coffee and sample hazelnuts, fresh breads, chocolates and fruit. The interesting thing was that many of the hot items there were things that grow in our fairly uncultivated yard: branches of flowering quince and pear blossoms, miner's lettuce, daffodils, tips of flowering cabbage (it was nice to see that I can still use those!), pea tendrils, etc. I came away with fresh leeks, dried wild mushrooms, a variety of greens, local honey, and a gorgeous bouquet of tulips.

On Sunday morning, we got up early for a "sunrise service" at Mt. Tabor park. The emphasis was less on sunrise and more on keeping dry in the rain and mud. It was a small gathering, which was really nice. Amelia did her best to curb her natural instinct to entertain the circle of grownups around her while we prayed and sang and read. It was sweet to celebrate Christ's resurrection at the very beginning of our day, and carry that with us throughout the other parts.

We invited Jeff's sister's family over for brunch on Sunday, and I finally had a good excuse to make a quiche-- Jeff and A don't eat dairy, and A doesn't eat eggs, meanwhile, I love quiche and omelets. I went to several different stores to find a pretty ceramic pie dish, since I had given mine away. I wasted most of the afternoon on that fruitless search, but ended up using a spring form cake pan instead. It turned out looking so beautiful, I don't know if there's really a good reason to make one any other way now! Anyway, I used the leeks, mushrooms and greens from the market, and have been enjoying the leftovers heated in the oven for breakfast all week. I also made this Czech Easter Bread, and although it was very fancy, the recipe had a lot of holes in it that I had to make up for and it turned out tasty but not as beautiful as I'd hoped. Jeff's sister brought a giant spiral cut ham and some fruit salad and the seven us put a tiny dent in the food we set out. No worries though, we have been enjoying our share of the ham every day since then, and I have plans for a big pot of split pea soup. 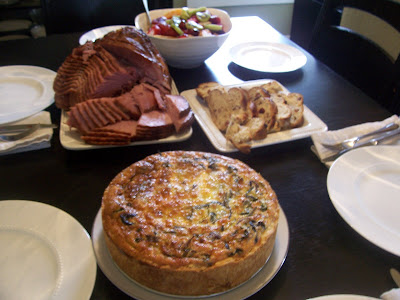 The egg hunt was a simple affair with dyed eggs and a few odds and ends. In the future I think I'll try to always have at least three kids involved, it's just too hard not to compete and compare when there's only one other person. At the end, it was hard to get a happy picture of both of the cousins, but we know they had a great time, all told! 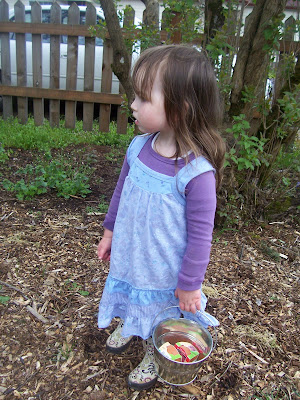 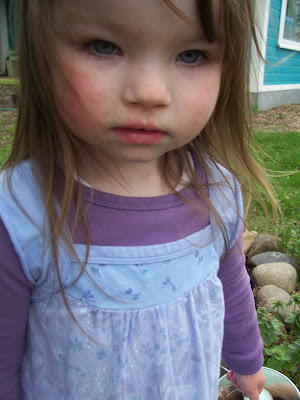 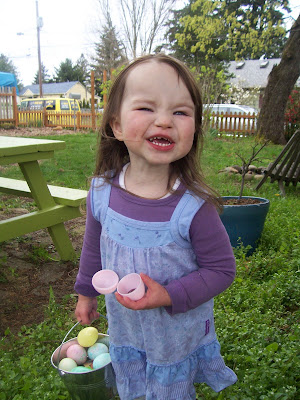 This is Amelia saying "Happy Easter!" Since Sunday, it has been nice to be greeted occasionally by her with "He is risen! He is risen indeed!" Indeed. How wonderful.
Posted by Unknown at 11:28 AM

What a scrumptious spread! Amelia looks like she is having a fun time hunting even with the serious looks. =0)