Between Then and Now....

It's been a few weeks since I wrote a real update, and it really feels like months. So much has happened! I will list here some occurrences of note, so I feel like I've caught you up.

- We moved into our apartment! I have a whole blog post about that day waiting, actually. It's on our other computer (a macbook air, which doesn't have the right ports to connect it to our DSL cable) and I can't get on the internet on that one to email it to myself!

- We bought a car! It is a little navy blue VW Polo wagon. It's old, but rather young in miles. Make that kilometers. I haven't driven it-- I don't have a license!

- We found a babysitter when I was about pull my hair out, and she came a few times and quit. On the upside, Amelia realized that I'm actually a pretty nice adult! For example, one time she was having a meltdown and I was like, "Hey, it's OK to cry sometimes. It really helps you feel better." And then the lady from Poland was all, "Ehmeelia! Why you cry?! You BEEEG girl now!"

- We visited Amelia's future kindergarten, and that went really well. She seemed to feel right at home there, in spite of the fact that there were a bunch of [shudder] children there, and didn't want to leave. It was very bright and cheerful, with lots of things to do. They had the cutest little locker room and also what they call their "bistro" where the kids eat their meals. Her teacher is really sweet and her parents actually own a local health food shop that specializes in gluten free foods! We are all super excited for school to start in a a couple of weeks.

- I have done a lot of cleaning. To my serious dismay, the previous tenants left the place absolutely filthy. It's really bad. As much as I have cleaned, it is still very dirty. It's gross. I've decided that I am officially making cleaning my hobby, so it doesn't feel so unreasonable to spend all of my free time doing it. Ick.

- I can now get around in stores, cafes and restaurants in only German. Although all I ever wanted to do was blend in, there is just absolutely no way that is happening when I have congenial little Amelia with me. Something that has been weird here is that everyone speaks in hushed tones all of the time. Amelia's vocal volume is permanently set on "bellow." It's embarrassing for me, but I can only assume that there is some sort of issue about feeling conspicuous that I am supposed to be working out here. We'll see. There is nothing like not wanting to be noticed as a newcomer to motivate you to learn a foreign language!

- Jeff turned 33 today. It's a fun year to share life with him! We are planning on driving to Munich this weekend. We'll spend one night there. Although I feel like I've done enough traveling for now, it will be able to leave the "settling in" feelings and duties behind for a day or so to just enjoy Germany.

I'll leave you with some pictures from dinner tonight. 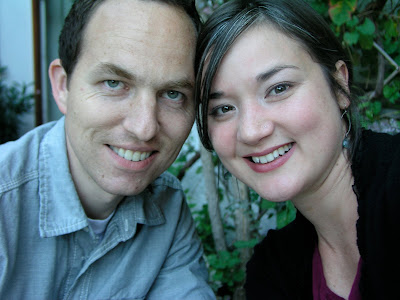 Here's the man of the hour! It may be Jeff's birthday, but I'm the one who's finally starting to look their age... 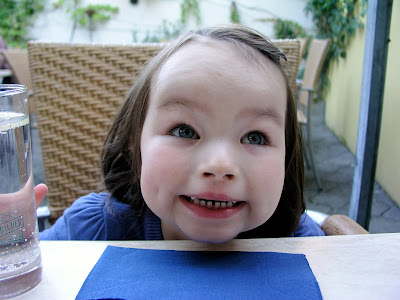 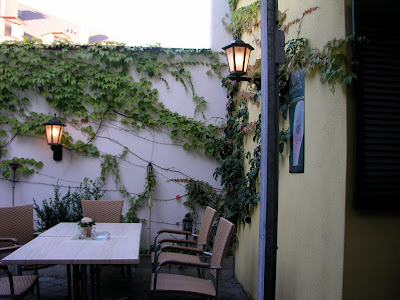 The "Biergarten" courtyard we ate at tonight.
Posted by Unknown at 1:42 PM

Happy Birthday Jeff!! You both look great!Sorry you've had to do so much cleaning.It must not have been a German who lived there.The pre-school sounds good. love you.

Happy Birthday, dear Jeff, happy birthday to you! It's good to hear that you got a car - I think I might be scared to drive there, but I guess people get used to those kinds of things. I'm so proud of you and your language ability! It's interesting about the hushed tones vs. the little bellow... sorry about that! And mom must be right about the dirty apartment - couldn't have been a German! I would have liked to heat in the Biergarten courtyard with you. It looks very inviting. Thanks so much for the nice update. :-)

The update is great!
I remember Heather's voice being SO loud! Peopled would way, "Wow, such a BIG voice from a LITTLE girl!!" Heh, heh!I would occasionally buy Wonder bread to feed the ducks at the local lake, so the kids called it "duck bread." One day Heather saw a lady buying a loaf of it and she said in her BIG voice, "Mommy, why is that lady buying DUCK BREAD to feed her children??"
I tried to smile & zoomed to the next aisle.

Is Amelia bothered by the fact that everyone at school will be speaking German, or does that not bother her? Does she have your amazing ability to pick up foreign languages?

Funny story, A. Gretchen! Glad you can relate...
I don't think Amelia minds yet about everyone speaking German. She is a model for language learning, walking around babbling in what sounds like German, just like babies first learn to speak. She'll pick it up so quickly, and is already relishing the thought of coming home and teaching me!