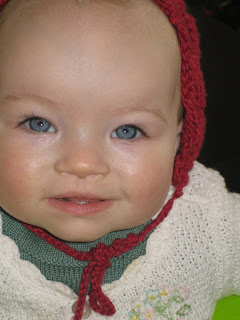 On Thursday morning, I was playing with Amelia in bed and she grabbed my eye while I was looking away for a moment. I had often thought about how a little baby could really do some damage, and wondered that I hadn't heard of many cases of earrings being ripped out or eyes getting scratched. Maybe most moms' reflexes are just quicker than baby. Maybe not. I couldn't believe how badly it hurt, but couldn't see anything obviously damaged when I looked in the mirror. I was also coming down with a cold, and some of the symptoms overlapped as well. I ended up pulling it together and took A. with me to MOCA with Heather Shack, who was in town. I began realizing while we were out, though, that my eye was pretty bad and just getting worse. It hurt to have it open, it really hurt to close it, and light was awful.

Jeff stayed homefrom work on Friday, and we were fortunate to get a Doctor's appt. at ten in the morning. The doctor numbed my eye (ah, relief!) and then put what looked like a strip of litmus paper in my eye to dye my cornea. She confirmed that I have a "rather large" corneal abrasion, and called and made an appoinment at an optometrist for me that afternoon. She also prescribed a "mild sedative" which I seriously considered but didn't take.

At the optometrist's office, three different people saw me, each with their own set of drops and bright lights to shine into my very sad and sensitive eye. I reconsidered my decision about the sedative, but it was too late. I have to admit that it was pretty gratifying that both of the optometrists thought it was really bad. One assured me that I wasn't the first to have a baby scratch them, but wondered when I'd last trimmed her nails. Apparently, she had scratched all the way through the first layer of the cornea, but the cut was also really rough. My favorite moment was a conversation between the two optometrists that went like this,
"So, do you think you'll put a contact lense over the eye to smooth it out?"
"Well, I thought about it, but there is already so much inflammation, it might make it worse. Actually, I was thinking about getting in there and scraping to even it out.... (Both get a little excited at the idea) But I don't think I will."
Is that what the "mild sedative" was for? Yikes! Anyway, I was happy that the treatment only involves three different drops every four hours. I thought it was interesting that they want to keep the pupil dilated all the time. This is because the dilation and constriction with light changes is what really hurts the most, since the whole eye moves when that happens. Educational experience.

Anyway, I am happy to report that my eye is feeling MUCH, MUCH better today. My vision on that side is still a bit blurry, but it looks almost normal. Now if I can just get over my cold, I will be in great shape. But I don't think I'll be wearing earrings any time soon!
Posted by Unknown at 1:31 PM

oh, my goodness...that's crazy. i'm glad that it feels better. i had corneal abrasions once...they were terrible and quite painful, however, mine didn't come from a "sweet looking" baby. i'm sure that you'll be able to recount this story to her many times as she gets older!

Ohhhh that is such a painful story! Anders scratched my eye this morning but luckily didn't do damage! It's amazing how swift and sharp those little hands can be!!
btw - my e-mail - gretchencox@yahoo.com. I would LOVE to have that picture of them looking at the camera!

I can relate to many parts of your story from my eye injury back in 2003. They kept my eye dialated for a week or two, which was hard to get used to. I had some corneal abrasions which got better within a few days and then it was the retina that took more time.

It definitely takes a prominent part in your existence, eh?

Hey Ariana!
Well, you looked great yesterday when I ran into you at TJ's. (c: I hadn't heard what had happened and didn't notice anything unusual. Hope the rest of your recovery goes quickly and well! Hey, let me know when you're up for another breakfast and scrabble! I'm game whenever you're up for it. And I'll try and stick with known/valid words. lol!

Ariana,
I just found you through Erin's blog and read this fascinatingly awful story. I would love to see you and this delicious baby sometime. Are you in L.A.?
Wondering and hope you're feeling much much better!
:)
Jonalyn

Hi Jonalyn, I'm in Whittier, actually! It would be fun to see you. My e address is ariana629(at)dslextreme(dot)com. Fun to hear from you! And my eye is almost completely healed, by the way.

These comments haven't been working for me lately. I hope this goes up.

Since becoming a mother I realized that however handy lips are for forming understandable speech and keeping food in the mouth, the real reason for lips is to protect babies' heads from their mother's teeth... how many times I ended up teary eyed with a fat lip, I don't know! I did escape without an eye scratch, however. I know what a relief those drops are when the doctor puts them in! I have a coreal dry-spot that really hurts sometimes! So glad it is better already!

I used to have to be really careful whenever I was in close proximity to Abigail. She had the habit of wildly flinging her head backward, or jumping as I bent over her, or wacking with her hand randomly. I got so many jaw wacks and chin wacks and just finally kept her far away from my face. She still can be a little unpredictable with her elbows...

I mostly visits this website[url=http://www.weightrapidloss.com/lose-10-pounds-in-2-weeks-quick-weight-loss-tips].[/url]Lots of good information here bloggyfamily.blogspot.com. Let me tell you one thing guys, some time we really forget to pay attention towards our health. In plain english I must warn you that, you are not serious about your health. Research points that nearly 50% of all USA adults are either fat or weighty[url=http://www.weightrapidloss.com/lose-10-pounds-in-2-weeks-quick-weight-loss-tips].[/url] Therefore if you're one of these people, you're not alone. In fact, most of us need to lose a few pounds once in a while to get sexy and perfect six pack abs. Now the question is how you are planning to have quick weight loss? Quick weight loss can be achived with little effort. You need to improve some of you daily habbits to achive weight loss in short span of time.