Relief and Dread.
All at once. After quite a long saga, lots of discouragement, letter-writing, phone-calling and waiting, I received my permit to take the OR state licensing exam for massage. I test March 19th. This is GREAT, since I have not been able to practice massage this whole time, and we have been losing untold amounts of potential income-- not to mention the joy, personal growth and fulfillment I receive from helping peoples' bodies heal themselves. But I feel completely ILL every time I think about the exam. It is a practical exam, meaning I will go into a room with FIVE people watching me and asking me questions and video taping my techniques and answers. There are about eight questions that they will draw and ask at random, and the body of knowledge from which these are drawn is vast. I cannot possibly study enough to feel confident at this point in my life, so my plan is to not really study at all. Maybe I'll pass and will have saved all of that time and effort. Or maybe I'll fail and then I'll know how to study most effectively for the next time. The thing is, I don't mind going into a room and quietly flunking an exam with my pencil and paper-- but fumbling, feeling embarrassed and unprepared in front of five peers for an hour is actually one of my worst nightmares! This kind of reminds me of my experience singing in high school. I loved singing in the choir, and was good enough at it that my teacher wanted me to be in the concert choir. However, at the end of the semester I had to take a sight reading test. I was so anxious and mortified about trying to sight read in front of the teacher that I decided to forgo concert choir the next semester, since repeating the experience was just not worth it! Stakes are much higher this time, though, so whether I pass or not it WILL be worth it eventually. But until then, I am just putting it out of my mind. Prayers here would definitely be appreciated!
Posted by Unknown at 11:18 AM 8 comments:


Can you guess what we did all afternoon?
Posted by Unknown at 6:16 PM 5 comments:

For the past two days, the weather has been absolutely GLORIOUS! Temperatures are in the upper 50's, the sky is blue and crystal clear. In places like Los Angeles, people take this kind of weather for granted all the time; not one person here has failed to notice and be thankful. Everywhere I go, everyone is grinning. And everyone is outside. Today we did a lot of yard work and got sunburns. Yesterday we went to the Eastbank Esplanade (a boardwalk along the river where people can walk, ride bikes, etc.) and it was packed. I took some pictures, since it seemed like such a significant life event a this point in winter! 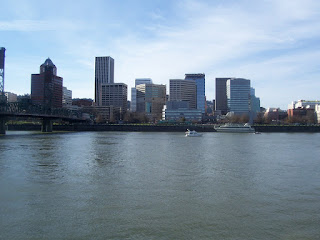 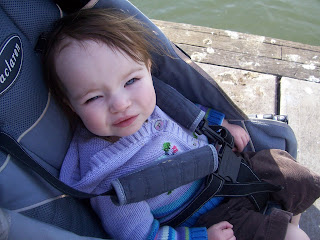 Amelia had a blast watching all the dogs and babies go by, and kept remarking on all of the water nearby. 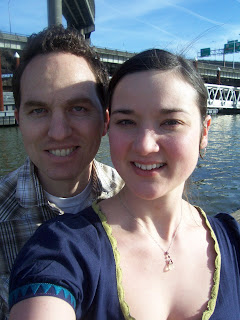 Taking these kinds of pictures makes J and I feel like we're on a date for some reason.

We are now more excited and anxious than ever for Spring to come!
Posted by Unknown at 5:46 PM 4 comments:


Nursery worker: Well, I was VERY surprised that Amelia had nuts in her diaper bag for her snack. I wouldn't think she'd be old enough for those yet.
(Possible interpretation: Wow, you REALLY don't know what you're doing, do you?)

Me: Actually, she does very well with nuts, and we already tested her for any allergies to nuts, and she can eat them! I was so relieved that they aren't a problem, since she needs the protein in light of the (previously mentioned) allergies to eggs and dairy.
(Interpretation: I've got it, thanks.)

We have continued to attend the Mennonite church for four weeks now. We have really appreciated the church's values related to serving and helping others, practicing evangelism in very physical, tangible ways. We continue to enjoy the worship services, and love that they are in tune with the spiritual seasons of the global church, currently delving into the meaning of Lent. There are so many things that make us want to be a part of this church, and we are so inspired by its mission and vision.

Attending this church has been a big struggle for me, however, because I have been so turned off by the general lack of friendliness. Not once on a Sunday morning has someone approached us to introduce themselves are ask who we are. We even went to an Ash Wednesday service last week that had 20 or so people there, and were obviously new faces (made more obvious by an embarrassingly talkative toddler who also seemed unwelcome) and afterward NO ONE spoke to us except the pastor! I couldn't believe it.

Yesterday, we went to a newcomer's lunch hosted by a young couple with a new baby. This couple was very nice and warm, and there were several other people from the church there as well. Surprisingly, the only other people who introduced themselves and were interested in chatting were the other new people-- the church people (apart from the hosts) were very standoff-ish. Of course, I went right up to them and introduced myself and asked them some questions, but the interest did not seem to be mutual. We are glad to at least have some faces we recognize and can say hello to on Sundays during that awkward time after the service, even if they are all newbies as well.

After talking to several people about their experiences in Mennonite churches, it sounds like the subculture is very tight-knit and hard to break into. However, once we are IN, they say, it's a really great, close community to be a part of! So we plan to persevere indefinitely. I'm hoping that the toughest part is over, but we'll keep you posted.
Posted by Unknown at 10:26 AM 4 comments:

A Compromise of Principles. 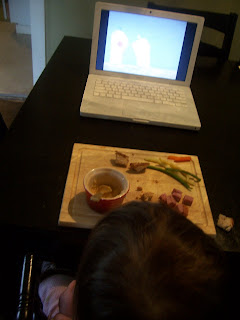 I just can't keep up with Amelia's obsession with being read to. I easily read her 20 books each day, and "book" is her first word in the morning (OK, at least after "Hi!") or after a nap... or actually the word she says the most all day. She follows me around with a book saying "Book! Lap! Lap!" She recognizes the library when we drive past, and she asks when we get in the car if we're going to the "brery." I love to read to her. But I can't do it ALL DAY LONG. So I checked a video out at the library yesterday. She loves it! It is a really silly, low-budget bilingual spanish educational video, and she makes me feel better about it by following along and trying to say the words.
I'm cringing inside, but it's good to violate certain principles now and then, so you don't take yourself too seriously. Also, I got the dishes washed and picked up the house.
Posted by Unknown at 2:24 PM 7 comments: