Once again, I have lost track of the camera-computer cable during the move, but it should surface soon, and then I will have pictures to share. We moved in a little over a week ago, but our belongings are still spread out all over the place. Our biggest challenge right now is figuring out how to make the most of our very limited space. The house is ~900 sq.ft., which isn't too bad, but that space has been divided into three bedrooms and a laundry room, in addition to the basic rooms in a house-- so each room in teeny tiny! One piece of furniture pretty much takes up any given room, AND we have no closets! No basement or attic or garage, so we really can't hide anything we own. The good thing is that we get to get rid of even more of our stuff, which always makes me happy for some reason. I don't do well at all with visual chaos, so I've been preoccupied with solving space and storage puzzles and trying to avoid going into my bedroom where most of our clothes are in a big pile, with nowhere to hang things. Although small, our house is pretty cute and funky and our stuff does look good in it. I am really looking forward to that point in time when I realize that my list of things that need to be done to it is only one page long, and not too expensive.

For the last four days, I have been attending a bodywork course on Cranio-sacral Therapy. This is something I had been looking forward to for years, and it was so exciting to actually make it happen! The work itself is really powerful and exciting, and I am looking forward to taking more advanced classes in the future.

Actually, I have taken Amelia in for a couple of treatments (performed by a midwife) in the last month, and it has really had a positive effect on her. Right after the treatment, her disposition really changed for the better. She is so much happier, sillier, more animated, and has much more ability to recover from frustrations or physcial limitations. It has been so wonderful to see her enjoying life more! I would need to take a few more classes before I could do the same work on her that the midwife did, but now I do have some tools that can be used on children, too. This picture is one that Amy (Jeff's mom) took while they had her for three nights so that I could go to this class. I also got some of the best sleep I've had in almost two years! 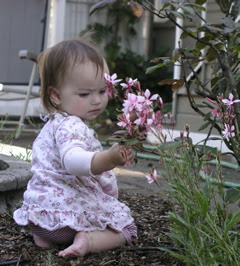 Jeff's job is going well and he has some really great colleagues that he actually looks forward to seeing when he goes to work (this has not been his experience in the past.) He has to do more work than was previously required of him, but it is also very satisfying and challenging in a positive way. We are hoping to have some of his co-workers over for dinner sometime soon-- we need to make some friends!

There is more to say, but I think I'll leave it at that. I will post some more as soon as I can get the pictures downloaded, and I'll be updating my other blog, as well.
Posted by Unknown at 10:18 AM

i'm glad that you are doing well. i can't believe how long amelia's hair is!! wow!

So, I had to google cranio-sacral therapy to learn more. Very interesting! Amelia is beautiful and getting so big. She looks less like a baby in that picture.
Thank you so much for your message, I was reallly disapointed to miss your call. I think I will try to give you a call tomorrow during Johnny's nap. I am looking forward to getting caught up.

Your daughter is beautiful! Happy to hear about your new house. How fun to set it up! Congrats.
C.Middleton