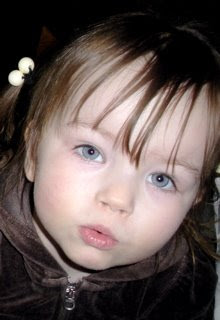 Yesterday, Amelia's classroom was visited by "Uncle Steve" and his collection of reptiles. There were snakes, chameleons and some other reptiles. One of the snakes was 10 ft. long. Amelia was pretty scared, and was held by a grown up the whole time, but couldn't stop talking about all of the animals and Uncle Steve all the way home. She also talked to Papa all about it at dinner, describing the snakes and chameleon and telling us what Uncle Steve said to her: "It's alright, it's alright, it's alright. Don't be scared, don't be scared." She had a happy afternoon and evening, and then trotted off to bed.

I was very happy to see Amelia so cheerful and my biggest goal for the day was to get to bed at 9:00-- I've been sick for a while, and sleep hasn't been as good as it should be. So when Mimi started crying after a little while, Jeff and I both got a little tense. Jeff went up there and comforted her, then came back downstairs. She started crying again, so it was my turn. She was complaining about the noises she heard in her room, and kept saying that she was having a hard time. I talked about our noisy world and laid down with her for a long time. She was OK when I left, but began crying five minutes later. I was so tired and beginning to feel frustrated-- and trying to brace myself for a very long night. Then I remembered about the "creature feature" at school, and that it had been scary for her, even though she had seemed fine for the rest of the day.

I realized that there were probably some genuine fears that needed to be addressed. This time Jeff went upstairs, and instead of trying to get her back to sleep, he got her up and talked about the snakes and "Uncle Steve." It came out that she didn't know where the snakes were now, that maybe they were somehow in her room. She and Jeff talked about where they were kept, and he assured her that they were in a box at Uncle Steve's house now. After that, she went right to sleep. She woke up once, crying and saying that she was scared, but was easily soothed and slept all night after that.

It's easy for me to slip into thinking my child is just being difficult, for no good reason. Of course, this attitude doesn't work for either of us. I am always glad when I stop and try to see things from her point of view and have real compassion. When I imagine what she is thinking or feeling, I can't feel very frustrated with her for her behavior. It is not easy being a toddler, as cushy as the job description may look! It must be so confusing and frightening to not have a full understanding of how the world works. She had just been introduced to all of these weird creatures-- if they can get into her classroom, what is keeping them out of her dark room at night? It felt so good last night to be successful in our attempts to help her through the experience, to give her some assurance and closure about her fears. I am reminded to keep her perspective in mind, and to just try to understand her when I feel frustrated. I needed that.
Posted by Unknown at 1:45 PM

Amelia is blessed to have such thoughtful parents. Good work! And I love that picture!

Yes! good job.I sort of wonder why they brought snakes into the pre-school.Seems like that could wait till kids are a little older. Love you

You are amazing Ariana! I wish you could be MY mother.