Let's Get Down to It.

Yes, I am rather backlogged on things I want to share with you. First, we'll talk about Munich.
Three weekends ago, we planned a rather last-minute trip to Munich. We found a European version of Hotwire and locked in a great price on a "top secret" hotel near the English Garden. It turned out to be a gigantic Hilton, in a truly amazing location. Our hotel room, while not anything special, looked out onto a river on the edge of a forested area surrounding the garden.

The weather was sweltering-hot. I had no idea it would be the last warm weekend here in Bavaria-- I might have enjoyed it a little more in that case! But the cement and stone of the city just made the heat and the sunlight really intense. It was a three hour drive because of terrible traffic, and our car doesn't have any A/C. The evening that we arrived, we a took a bus to a nearby shopping district and mostly walked around, and did some clothes shopping for Jeff. I also found my very own dirndl at a quirky little shop there. (As a side note, people really wear dirndls and lederhosen here! I couldn't believe it. Sure, there are the older gentlemen in the full ensemble, including feathered hat-- but also young guys chilling at a coffee shop in their lederhosen! And whenever there is a festival, women are seen everywhere in their cute dirndls, and it's a common restaurant server uniform as well.) We had some wonderful Greek food for dinner, and called it a day.

The next morning, we set out to really "see" Munich. Unfortunately, it was Sunday and most everything was closed. But cafes and restaurants were open, and plus you don't have to go through any doors to see all of the incredible Gothic architecture of the city. We wandered around for a very long time and finally came to the Marienplatz, where we found some breakfast. The sun was so hot and bright, that we tried to stay in the shade us much as possible. The place was just crawling with tourists, and we were right next to the city hall with a famous Glockenspiel that people were crowding into the square to see every hour. We mostly walked around for the morning, then were looking for some refuge from the sun. 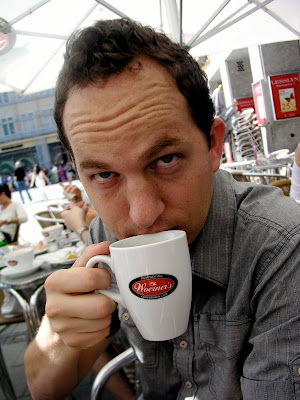 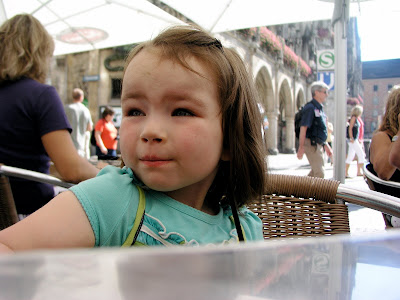 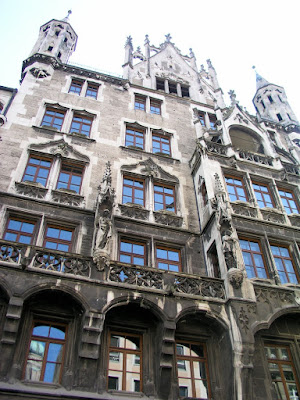 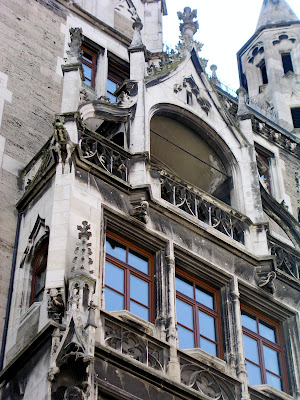 The English Garden was the perfect shady escape. It's not so much a garden as I would think of one, but a really big, beautiful green space. It was actually kind of like a nature amusement park. It is one of the worlds largest public parks, even bigger than Central Park. It was fairly crowded, and there were various attractions-- the Chinese pagoda, a lakeside restaurant, meadowy sunbathing spaces, etc. Also, lots of live music, of the oom-pah-pah variety. It was really nice! One highlight was a rickshaw ride from one end to the other. I didn't get many good pictures, but you'll just have to trust me that it was like a movie set akin to the "Jolly Holiday" scene in Mary Poppins. 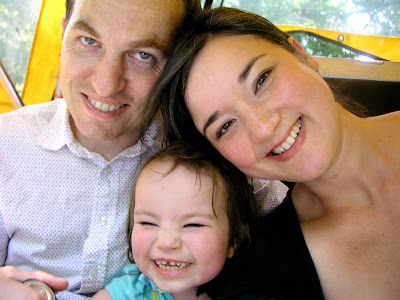 Crammed into the rickshaw! 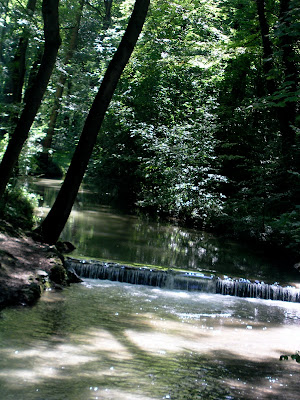 One of several stream that help keep the whole place cool-- we had fun taking our shoes off and wading in it. 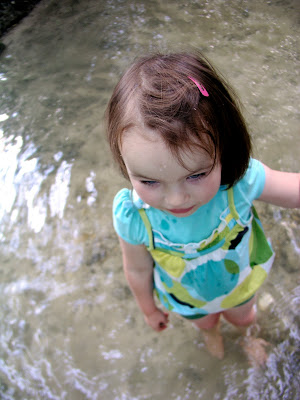 After the long, hot drive going to Munich, we decided it would be best to hit the road early in the afternoon. Fortunately, we made great time getting to Amberg, and having the full evening ahead of us here made us feel more refreshed after a fun weekend. Although I don't have any more plans to travel for now, it was so much fun to get out and be a tourist for a couple of days, not needing to worry about anything but having a good time as a family-- such a welcome relief after all of the packing, moving, unpacking, adjusting, etc! We really look forward to going back again, and can't believe it's such a reasonable drive for us.
Posted by Unknown at 12:11 AM

More great pictures! Fun, since we were there! We enjoyed the Marienplatz, had coffee and something way better than a doughnut, freshly made, while there with Jutte.

What a fun vacation! Love these posts!

Very nice post. Glad you got to have a little family getaway.